Professor Wole Soyinka, Nuhu Ribadu and Femi Falana to speak on the “State of the Nigerian Nation” in London. 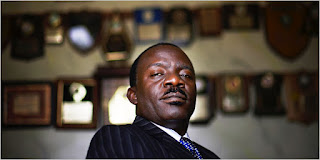 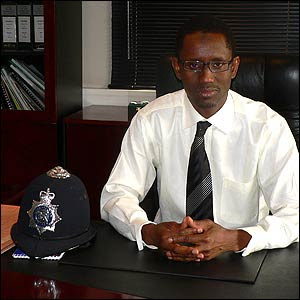 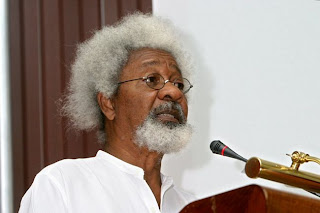 Professor Wole Soyinka
For 40 years the Nobel prize-winning writer Wole Soyinka has been an outspoken opponent of brutal regimes.
Wole Soyinka.
The Man Soyinka by Eamonn McCabe
When the Nobel laureate Wole Soyinka fled Nigeria in 1994, and was sentenced to death in absentia by the military regime of Sani Abacha in 1997, he likened the "liminal but dynamic" state of the writer in exile to a parachutist's free fall. His limbo was ostensibly ended by Abacha's sudden death from a heart attack in 1998 and Nigeria's steps towards democracy. Yet for Soyinka, whose 1970s prison memoir famously proclaimed that "the man dies in all who keep silent in the face of tyranny", there can be no true home without justice. "I'm still looking forward to a homecoming," he says, though he now moves freely between Nigeria and the United States - he lives near Los Angeles and since 1997 has been Woodruff professor of the arts at Emory University in Atlanta. "To really feel you've come home, you have to have overcome the factors that sent you out. That's not happened yet - and probably never will in my lifetime." Soyinka is 68, and for more than 40 years his most obsessive theme has been "the oppressive boot and the irrelevance of the colour of the foot that wears it". The 1986 Nobel prize judges deemed him "one of the finest poetical playwrights to have written in English". Yet his lifelong critique of power has also been through screen and radio plays, poetry, novels, essays, and autobiography.
UK Guardian Newspaper on Soyinka. 2002.
Nuhu Ribadu:
Nuhu Ribadu's fight against corruption made him a national icon in Nigeria. He was appointed to the position of the chairman of the Economic and financial crimes commission (EFCC) in 2003 by former president Obasanjo. He prosecuted some of Nigeria's prominent politicians, civil servants and businessman. Ribadugraduated from the Nigerian Law School and was called to bar in 1984 before joining the Nigerian Police Force, where he rose to become head of the legal and Prosecution department at the Police headquarters in Abuja. He then led the EFCC during his four years at its helm to an unprecedented 200 criminal convictions.Ribadu has been the recipient of numerous awards as a police officer, prosecutor and EFCC Chairman, including the Inspector General of Police awards in 1997, 1998 and 2000and presidential special commendation in 2005. In 1999, he was commended by the Accountant General of the Federation for succesfully prosecuting corrupt public servants. More than once, prominent newspapers in Nigeria have voted voted Ribadu "Man of the Year" in recognition of his achievements as a committed crusader against corruption. Nuhu Ribadu ahs since undergone persecution by the Nigerian government between 2007 and 2009, he was removed from his position as the EFCC chairman, sent on a compulsory course by the police IG, demoted by two ranks and finally expelled from the Nigerian police. He is currently particiapting in fellowship at Oxford University in London.
Femi Falana.
Femi Falana is acknowledged as a credible and consistent voice in the ongoing campaign for a just rule of law in Nigeria. He is highly regarded as a strong and effective pillar against rights abuses and tyrannical rule as well as an advocate of good governance in Nigeria and across Africa. No less significant is Femi Falana?s contributions to legal development in Nigeria and outside the country. In his dual capacities as the Editor-in-Chief of the Weekly Reports of Nigeria (WRN) and Ghana Monthly Law Reports, Femi Falana is daily pre-occupied with making available to our legal practitioners, judges and other stakeholders in the administration of justice, decisions of superior courts of records of Nigeria and Ghana.
Posted by Unknown at 17:26