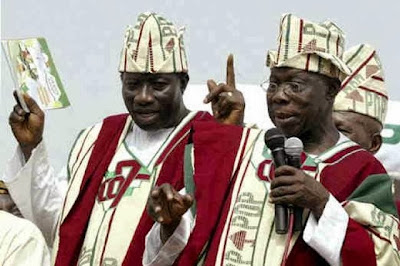 I am not a fan of have General Olusegun Obasanjo but I have read his 16 page letter to President Jonathan trice. Obasanjo’s government remains the only civilian administration that imprisoned me UNJUSTLY for over a month simply for stating my views on the State of The Nigeria Nation under his regime.

When it comes to intolerance, grand corruption, deceit, moral bankruptcy, General Olusegun Obasanjo will sure be in the top-3 in the world league of misfits who ruled in Africa. Here is a man who slept with his sons wife inside Nigeria's presidential palace and even failed to put up a defence in court when the allegations came up. A man who sold every viable public cooperation to his cronies and concubines at give away prices.

Obasanjo is that man who betrayed every known good cause, he his the cunning fox that would arrive when a war had been won and claim victory, when it comes to 'playing both sides' OBJ is the master of the game. Here is a man who punished his Yoruba people for democratically rejecting his candidacy knowing fully well how evil he could be.

Well today is  not about Obasanjo, like I told the then SSS director Mr Kayode Are during interrogation in May 2003 at his palatial SSS Headquarters in Abuja, Obasanjo will go down in Yoruba history as an 'akotileta' a traitor and no matter what others see him for, a real Yoruba would always place him in the darkest side of our history.

In as much as I am sincerely convinced that in many ways Obasanjo is as profligate as Goodluck Jonathan, no patriot can dismiss his weighty allegations against President Jonathan. Truth irrespective of the medium through which it is communicated is sacrosanct and must be espoused by all men of goodwill and courage.

If GEJ is wise, he should retreat into whatever space in which he finds the inspiration to be himself,  beyond the reach of his kinsmen, self-serving special advisers, and sundry sycophants so he could read Obasanjo's letter as many times as it is necessary for him to apply his mind to the facts and consequently do the 'NEEDFULL'

Jonathan must free himself from his cave mentality, he should stop seeing Nigeria from a perspective of a timid man in need of sympathy, Jonathan behaves and carries himself like a man in need of validation and not the President of a country like Nigeria. He does not understand what it entails to be called a commander in chief. He spends more time currying for sympathy, every issue is about Jonathan. If Boko-Harram kills innocent Nigerians, Jonathan turns the debate into his person. Here is a President who always fails to see the bigger picture.

Initial reactions have said Obasanjo’s letter is like a kettle calling the pot black but that does not mitigate the fact that the current President and Commander-in-chief of the armed forces of the Federal Republic of Nigeria is accused of extremely TREASONABLE ACTS against the Nigerian people; that is a very SERIOUS allegation. It behooves a clear unequivocal response from Dr. Jonathan who must first of all convince Nigerians of his suitability for the office he currently occupies and why he is even within speaking range of such grave charges.

Thus, it is no exaggeration to say Mr Jonathan is a ticking time bomb and Nigeria could implode with him. It is perceptive to say that might be his vindictive agenda because it appears the destruction of Nigeria will be “sweet” revenge for the many years of injustice against his Ijaw ethnic Nationality.

Mr Ebele is making a mistake, revenge brings extreme wrath. Why should he toy with the lives of his Ijaw people by capriciously tying his selfish ambition to their fate? May God give him the wisdom to consider his ways and make restitutions.

As for Olusegun Obasanjo and those who claim Jonathan promised not to contest in 2015. Can they for the sake of Nigeria stop sulking and contest against him if they think he's unfit. Jonathan did not make the promise to the Nigerian electorate, it is none of my business, so long he's constitutionally allowed to seek re-election, what is my business is that the President of my country is being accused of keeping trained snippers to kill assassinate opponents, that he's raising an army in his Ijaw homeland using our territorial water ways to smuggle and stockpile arms, that he's the commander in chief of corruption. That is a treasonable act against the people of Nigeria. If the allegations are proven to be true, Mr Jonathan is not fit to be the President of Nigeria.

This is an auspicious moment for Obasanjo to apologise for the part he played in imposing a sick Y'aradua and an obviously incompetent Jonathan on a great Nation like Nigeria. There is nothing wrong with Nigeria being ruled by an Ijaw man; it is only reasonable that the man ought to have been the best of the Ijaw Nation rather than a man that is obviously unfit to be a clan head? A word is enough for those who have ears.

Posted by Unknown at 00:39 No comments: Links to this post