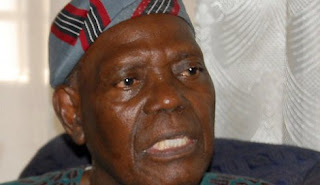 “This is not a matter of an individual but the party. Nobody should accuse ACN of imposition because that is our style. Anyone that is not comfortable with that should go and contest in another political party. So if you see anyone carrying placard around, he is wasting his time." Chief Bisi Akande Chairman Action Congress of Nigeria

I read the above statement over and over again, I was in self denial, Chief Akande would not have made the above statement, I rushed to the Vanguard LINK http://www.vanguardngr.com/2011/01/why-acn-imposes-candidates-akande/, read it, I was not sure, called the reporter and he confirmed it, that Akande is justifying the present ANTI-DEMOCRATIC practises on going in the party I had hoped will bring change to my people is a STAB IN THE BACK.

They do not deserve to be called ELDERS, what we now have are what I will refer to as AMUNISINS how can they just fling the hope and aspiration of the people into the drain, when we remained in the barricades they where holed up in their homes granting press interviews and drinking tea, when Yoruba land was under blockade, how many of them came out to defend the land on the streets, we asked for good governance, they gave us corruption, we asked for exemplary leadership they gave us despotism, what is now the difference between them and the PDP described as the “nest of killers”?

They had the chance to change the region and what did we get in return some sort of expectation that when they cough we should catch cold, when their children sneeze we should fret. I am a free-born Yoruba man and slavery is no longer in fashion, people should vote according to their conscience.

Accepting internal dictatorship so as not to fall under the dictatorship of the foreigner is unacceptable. Democracy must and should reign supreme in our region. If they are going to continue with the same “amunusin” democracy, what was the point of destroying Afenifere and the Alliance for Democracy?

So now what we see was the removal of our people from the enchantment of a group cult to the pocket of ONE man. Not one of all those calling themselves Yoruba leaders now are worthy of cleaning Awolowo’s shoes. Forget the Awo cap they use in deceiving us, judge them by the number of roads they fix, the transparency in government and the democratic practice.

Sincerely what was the point in destroying Afenifere? What was the point of destroying Alliance for Democracy? Was it not the same argument former Lagos State Governor Bola Tinubu put forward in 2003 and we rallied around him, thinking all we wanted and look forward to was the opening up of the democratic space so that ALL in Yoruba land and in Nigeria can aspire to be whatever they want to be so long they are capable of serving our people in a democratic dispensation and so long those who aspire are free from corruption and evil deeds, what transparent government have we been able to deliver since the overthrow of the old guards? So all those talk about making Yoruba Land a “shining example of modern democracy” was all TALK to bring relatives, cronies, praise singers, and sycophants into government, cant we see that the imposition that is taking place now is worse than the one that took place during the Awolowo days, Awolowo was not imposing his children, neither did he impose his girlfriends, I am not sure he would have imposed Atiku Abubakar as presidential candidate if he were to be alive in 2003. I am not sure the collegiate system being touted by beneficiaries of fraud today was meant to submit a whole race to the pocket of one man.

Did we not all sing NO MORE BABA SOPE in Ijebu Igbo against the OLD GUARDS and Pa Abraham Adesanya? Did we not condemn the old man for allowing his daughter to serve under Olusegun Obasanjo what are we now doing that is different from the dictatorship of the past, cant we re call 2003 and heed the wise counsel that the PEOPLE CAN HAVE THE FINAL SAY? Those who remain quiet now for fear of being labelled can live ever happily, our ancestors, the blood of the ordinary Yoruba who died crying and campaigning for LIBERTY will never let the fraud go for long. If those who are now raping our land fail to heed the voice of the people, ADABI will reward them, if not when they are alive, their children and offspring will pay for the RAPE ON DEMOCRACY
Posted by Unknown at 04:04 50 comments: Links to this post

No voting equipment, no election officials, no security and an election chairman indicating events are out of his control. CNN

Posted by Unknown at 21:53 No comments: Links to this post