Jos! Cover up of a Nigerian Genocide! By Kayode Ogundamisi 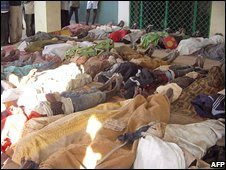 Jos! Cover up of a Nigerian Genocide! By Kayode Ogundamisi

Body of Victims of the Jos Genocide
I have been putting my Yoruba nationalism in the background and engaged more on National issues whilst trying to unite different Yoruba self determination groups quietly and also selling the idea of a Yoruba Nation within Nigeria, with the right to self determination under a confederate unit. The event in Jos is about to change that. Not the killings in Jos alone as we all know killings based on ethnicity will keep recurring in Nigeria until the day we all seat down on a round table under a sovereign national conference and decide on how we want to live together as brothers, sisters or otherwise. Until we do that the blood to keep Nigeria together will flow more than the blood required to take it back to the pre colonial days when independent Nation-States lived and developed at there own speed.Back to the source of my anger.

The Jos crisis occurred on my way to Slovenia and as I kept pace with Jos I also tried to keep pace with the events in Mumbai were terrorist were busy cutting down the lives of innocent folks.As I monitored the events in Jos I noticed conflicting figures on the number of people killed. The Nigerian media kept moving from figure’s ranging between 200 to 400 and the Nigerian government not reputed to stating facts as it is kept the figure down to 120. I tried putting a call trough to the presidents media man Olusegun Adeniyi to confirm if figured being put out reflect the situation on ground but I was not succesfull doing that.I have very close and emotional ties to Jos. It was in Jos that I got my social activism sharpend; I did not only live in Jos but also had the privilege of being detained in the famous Jos Prison by the Babangida government and felt the warmness of the people of Plateau more in that colonial Prison.

I am a graduate of the university of Jos. The people of Plateau were not only pleasant but very generous to me and I almost became their in-law but for faith. One of my benefactor Alahji Abdul Karrim Iyimogah a then commissioner of finance in the old plateau state welcomed me to his house from the streets of Lagos and encouraged me to study first in the Federal Polythencinc Nassarawa and later the university of Jos. And all trough my activism in Jos he never interfered, neither did all those wonderful people I met in Jos tried to paint me as an ethnic jingoist. As students of the University of Jos and I fought on behalf of the people of Jos we shared a common desire. Make Jos a land tolerant of all race and the rocks on the Plateau a place of rescue for the helpless.I raised enough money in London sent home to Nigeria and commissioned two-experienced researcher on the true death toll in Jos and I am sorry the results they are giving me are worrisome. In Lagos state alone they could locate 39 Yoruba families who lost not only one but as many as 6 family members in the Jos crisis.Till date all the southwest governors keep mum on the massacre.

The Lagos state governor whom I admire a lot but whom this days keep himself away from any Yoruba event as if identifying yourself with your race this days is a sin, was consulting with Nigerians in London whilst his Yoruba kinsmen are mourning in Lagos and other part of the South West.I request governors in the southwest take a lead and start the process of compensating victims of the Jos Massacre and resettle returnees.

I am outraged by the silence befalling Yoruba self determination groups, The ignoble way the Federal Government in Nigeria is treating the incident in Jos.I crave for unity not revenge and I beg we see this as a sign that with all the in fighting and scheming in Yoruba Land over a ludicrous “YORUBA LEADERSHIP” our people who are defenceless are becoming victims of our blind ambition.Those killed in Jos are more than 2000 (TWO THOUSAND) and I challenge the Nigerian government to disprove that figure. Set up an autonomous commission into the killings in Jos, what happened in Jos is a GENOCIDE against defenceless Nigerians whose only sin was living outside their state of origin.If president Umaru Yaradua assume people are not outraged about the killings in Jos he his making a mistake, the Niger Delta will be a Childs play if Nigerians now start resorting to self help to protect themselves.I dropped the use of self-help as a means of protection 7 years ago after taking the decision to step down as the secretary general of the O’Dua Peoples Congress. It is now obvious Nigerians now have to keep a “mad man” in the house to serve as a deterrent to the “mad man” outside. And to those shameless “leaders” in Afenifere whom rather than unite and protect Yoruba are busy fighting themselves, A day will come we would have no choice but visit you in your homes and knock some sense into your head.I am outraged.

Kayode Ogundamisi
Posted by Unknown at 06:16 4 comments: Links to this post